The Truth About Mutant Rats 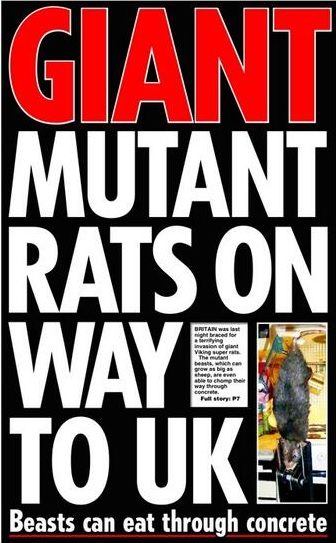 In general, rats are regarded as some of the most annoying and dirty creatures in the world. But, a new variety of rats,often referred to as ‘mutant rats’ or ‘super rats’, promise to be even more of a scourge on our environment. They can even be dangerous!

What are mutant rats?

Mutant rats are rats that look much larger compared to common rats. That is because they have undergone genetic mutation. They tend to be very strong, too. Other than that, compared to traditional rats, they can behave differently in the presence of rat poison and rat exterminator measures.

Super rats do not look any different from normal rats. They have a similar shape and look almost exactly like other rats from a distance. However, on closer inspection, they differ from traditional rats in the sense that they tend to be very large in size. In many parts of the UK, rat control agencies have spotted super rats that have a length of 50 cm, or more! One rat even had the width of a shovel!

Where are they found?

Rats that have undergone mutation can be found in many parts of the UK. They can hide out near bodies of water, inside the walls of a house, in a park, or any other place where rats are usually found.In certain places, the number of mutant rats actually exceeds the number of traditional rats. In Southampton, for instance, researchers found that nearly 75 percent of all rats had some kind of genetic mutation, many of them resistant to various forms of rat control.

How to control them?

It is not possible to control super rats with the help of traditional rat pest control solutions. That is because they are not affected by rat poisons. They have a really strong build. Some of them are so strong that they can make a hole in a cement wall easily! Many scientists, therefore, are now attempting to find new ways especially designed to tackle them. Also, it is expected that their number will continue to rise in the years to come.

Super rats are some of the toughest creatures on earth, and it is not easy to deal with them. Scientists will no doubt discover effective ways to keep them in control in the future. But still, for now at least, spotting super rats in the house can be a scary experience!